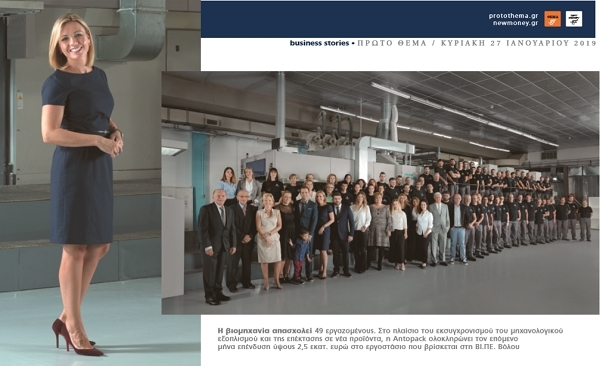 Antopack: An Industry from Volos counting 121 Years of Life

It is one of the most historic industries in Greece with a long course dating back to 1898. Yet, beyond the limits of Magnesia, most people do not know much about it even though they keep in their hands daily commodities whose packaging it signs. Antopack-Antoniou S.A., as it has been called since 2007, started from a small lithography workshop in the dusk of the 19th century (just one of the three existing in Greece at that time) in a difficult economic time for the country since it had just preceded last year «the black '97» and five years before the «moratorium» that Trikoupis had decreed.

After 121 quite eventful years for Greece, the small workshop has evolved into one of the most sophisticated industrial units in the printing, box and label manufacturing industry with significant and well-known long-standing customers (Athenian Brewery, Barilla, Coca-Cola HBC, Papadopoulos Biscuits, Jotis, Unilever, etc.).

This proves that even in times of great economic crisis there is always the opportunity and leeway to lay the groundwork for ... great things! That is why recognition in the industrial world is universal. An indication of that is the fact that, last year, SEV (Hellenic Federation for Enterprises) included Antopack in the campaign "Production and Manufacturing in Greece." Téa Antoniou, the company’s chief executive officer, acknowledges that «Responsibility is great» when inquired about the challenges and the responsibility of continuing the family business at «business stories». «I try not to think about it and focus on the development plan we have drawn up» she adds, pointing to her organized and methodical nature, which she traces to her half-German (on her mother's side) ancestry.

For about six years, the fourth generation of the family has taken over the wheel. Along with Téa, her brother George is also the chief executive officer, and her cousin, John, holds the role of the chief operations officer". We also have a ... Merkel in finance", says Ms. Antoniou jokingly referring to her mother, who continues to help in the financial management.

Her father, Angelos, who along with his brother Dionysis had evolved the company over the past decades into a sophisticated industry and had linked his name to the local news by founding the regional channel TRT in 1990 and obtaining one of the first TV licenses, passed away last year. «It was a great shock for us. For the company, however, things had already been set in motion since 2012", says Téa Antoniou. She also mentions that her father's great love and passion was TRT Channel and Radio VERA (Volo’s Free Radio), which still remains in the property of the family (TRT was sold years ago to Hellas Net owned by shipowner Giannis Karageorgis).

«If my father had devoted the time and effort spent on the channel, our company would have been one of the largest in the country. I believe that», she mentions. She herself dedicates all her efforts and attention in their company and its 49 employees whom she considers her children, as she says, despite being just 40 years old, wanting to stress the responsibility she feels for them, «especially in a region that has almost been deindustrialized».

The goals she sets are unquestionably high and are associated with the plan in motion to expand into new markets. «I wish to double our turnover to 15-18 million euros by 2020. That means we have to put weight on our direct exports, which today account for only 8% of our turnover», as she points out, although she admits that «goals should better be set higher in order to "stretch yourself out" even though it may seem as if you cannot reach them».

In the long run, however, she states that the company wishes to keep an annual growth rate of 12% -14%. It should be noted that the turnover of Antopack-Antoniou S.A. in 2018 closed at nearly 8 million euros in a «positive year», as the CEO portrays it. In addition to the European countries where there is an abundance of consumer goods, Ms. Antoniou's interest in Africa is tremendous.

«I believe that there lies the future of packaging and printing, given that these markets are highly developing and without the great competition existing in Europe».

The penetration there, of course, is not just an easy task, as she has found out on her many trips to South Africa and Ethiopia, and also by taking part in exhibitions there. «The funny thing is that even in Africa we are inquired about our country's economy. Remarkably, "the risk of Greece" is even invoked by Africans for displaying caution in signing a trade agreement».

As part of the modernization of machinery and expansion into new products, next month Antopack will be finalizing an investment of 2.5 million euros at the factory located in the Industrial Area of Volos. Investments totaling 5 million euros had taken place between 2008 and 2017. One of the products that the company wishes to enhance in recent years is the so-called «display boxes», that is cardboard boxes with printing, which along with the products enter the shelves of retail chains. «It's a new market. Now the box is colored and glossy.

It may have started with discount markets, but mainstream chains are now using it to a certain extent, since on the one hand this particular packaging gives added value to the product and on the other hand chains are saving up on manpower», says Ms. Antoniou and adds: «Unquestionably, all this requires know-how. Just keep in mind that we're talking about paper that enters the humidity of a freezer...».

Besides, she believes that the future in the industry is paper packaging. Something that, as she mentions, is already apparent with the efforts to restrict plastic packaging that has been launched at EU level.

Digitalization is also the future, she states. «In this part I can say we are quite ahead. If we exclude the accounting department where the printings for invoices, consignment notes, etc. are performed in accordance with current legislation, the entire company operates exclusively electronically».

As far as the course of the economy and the country in general is concerned, Ms. Antoniou appears optimistic. She underlines that in the last few years many steps have been taken towards a positive direction, but there is still much to be done, both in terms of the functioning of the state and the strengthening of entrepreneurship and the change of the negative attitude towards businesses. «Messages are positive, although the people have not yet seen this improvement. Neither will they see it immediately.

At first, we will notice the improvement in macroeconomic figures and later this improvement will spread to wider social strata. That is always the case. Besides, the same happened with the crisis. It may have actually made its appearance in 2008, but was not before 2011-2012 that it was experienced by everyone. Likewise, we will need a few years, about four, until we eventually become aware of the benefits of the economic rebound in our daily lives. All of this, of course, provided that nothing unexpected occurs».