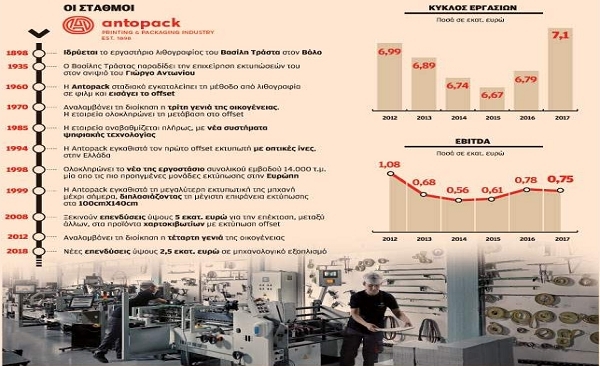 The history of Antopack dates back in the late 19th century. Based in Volos, it is not only one of the oldest printing companies in the country, but by investing steadily and systematically in cutting-edge technology and state-of-the-art machinery, it ranks among the most advanced in Europe.

Antopack embarked on its business venture in 1898, when Vasilis Trastas founded a lithography workshop in Volos. That was an extremely turbulent period for Greece, which was trying to get back on its feet after the bankruptcy of 1893 and the humiliating defeat in the Greek-Turkish War of 1897. Vasilis Trastas was one of the three lithographers who existed in Greece at that time! The technique of lithography was discovered in the late 18th century in Germany by Alois Zenewelder and the lithography artists drew - wrote the theme they wanted to print on a stone and subsequently the paper was "pressed down" on the stone and the plot was imprinted on the paper. It is noted that the lithographers painted their theme on the stone upside down (so as to be printed correctly on the paper) using a mirror!

In 1935, the company was passed down to the second generation of the family, the nephew of V. Trastas, Georgios Antoniou, who was distinguished for his particular artistic nature and his inclination to lithography. The transition to the second generation coincided with the gradual decline of lithography internationally and the discovery of new printing methods (offset). In the 1960s, the company introduced the offset technology abandoning lithography-to-film technology, while in the early 1970s the third generation of the family took over the reins, with Angelos G. Antoniou in charge of sales and finance and Dionysios G. Antoniou overseeing production. The new administration, headed by the late Angelos Antoniou, has left a lasting imprint by successfully leading the transformation of the traditional family unit into a modern enterprise.

1985 constituted a milestone year for the company, as it received its current corporate form under the name Antopack, while its radical technological upgrading was completed with the installation of new digital technology systems. In 1994, Antopack moved forward with the installation of the first fiber-optic printer in Greece, and in 1998 –a hundred years after its inception– it completed the big investment for the creation of a new, state-of-the-art factory with a total area of 14,000 sq. meters, within the vicinity of Volos, through which the company was upgraded to one of the most advanced printing facilities in Europe.

For decades, Antopack has been at the forefront of technological advancement in its sector by investing large sums in mechanical equipment, and today it is the most modern printing unit in Greece and one of the top ten in Europe. By using CTP (computer-to-plate) technology, the company can achieve the minimum color deviation from the digital file to the final matrix, allowing it to guarantee up to 98% accuracy in the hues chosen by each client. Its clientele includes some of the country's most powerful industries, such as Athenian Brewery, Barilla, Coca Cola, «Papadopoulos Biscuits» and others, with whom it maintains long-term collaborations.

With state-of-the-art mechanical equipment and an extremely strong financial position, Antopack has managed to pass through the big crisis unscathed.  Since 2012, the company has managed to increase its productivity, to minimize the losses from failures (wastage) and to reduce operating costs while improving the quality of its products. Thus, from 2012 to date, it has maintained its turnover at around 7 million euros, has remained on a profitable track and retains 80 job positions despite the dramatic contraction of the domestic market.

Purchase of new equipment worth € 2.5 million

The new Antopack investment program of € 2.5 million is in progress, which pertains to the installation of a new machine that will significantly enhance the company’s productivity and flexibility. The acquisition of this machine was something that the company has been considering for some time now, but the stabilization and improvement of climate conditions have been seen as essential prerequisites for this big step. The relevant contract was signed about a month ago. During the period 2008 - 2017 the company made investments totaling 5 million euros, mainly related to the incorporation of its cardboard boxes products with offset printing and the renewal of mechanical equipment, software and other infrastructure in general. It is noted that control of the temperature and humidity conditions at the company's factory is of utmost importance as paper and cardboard are sensitive materials and require specific handling conditions. Thus, through a sophisticated air conditioning, ventilation and water spray system; Antopack controls and maintains the desired ambient conditions to ensure optimal raw material quality. The company’s premises in Volos house state-of-the-art machinery, such as the six-color optical fiber printing machine (MAN ROLAND 900) and the die-cutter (BOBST 142 ER). From 2012, the company set in motion its attempt to expand into new markets. Today, exports amount to about 15% of turnover and are directed to countries such as Saudi Arabia, Iraq, South Africa, Jordan, Bulgaria and so on. Antopack's goal is to further strengthen its presence abroad, focusing on the markets of the Gulf countries and the neighboring countries of Southeastern Europe.

The reins in the fourth generation of the family

In 2012, the fourth generation of the family took over the reins of the company, with Téa A. Antoniou as Chief Executive Officer, George A. Antoniou as Chief Executive Officer and John D. Antoniou, as Chief Operations Officer. Although the new administration took over at a very difficult time for the country, however – as Ms. T. Antoniou points out in the newspaper "K" – «the company faced the challenges relying on its strong capital position and the competitive advantage stemming from its technological superiority». The company systematically invested the bulk of its profits to strengthen its infrastructure, making very limited use of bank loans.

George Antoniou singles out the human resources as a strong competitive advantage for the company, which, as he stresses, «even during the most difficult times has proved its value». Giannis Antoniou states that despite any related suggestions, the company never considered its transfer away from the Volos region, adding that the main objective is «to support the local community by sustaining already existing jobs and by creating new ones».

As far as the course of the economy and the country in general is concerned, Ms. Antoniou appears optimistic. She underlines the fact that in the last few years many steps have been taken towards a positive direction, but there is still much to be done, both in terms of the functioning of the state and the strengthening of entrepreneurship and the change of the negative attitude towards businesses. «Messages are positive, although people have not yet seen this improvement. Neither will they see it immediately. At first, we will notice the improvement in macroeconomic figures and later this improvement will spread to wider social strata. That is always the case. Besides, the same happened with the crisis. It may have actually made its appearance in 2008, but was not before 2011-2012 that it was experienced by everyone. Likewise, we will need a few years, about four, until we eventually become aware of the benefits of the economic rebound in our daily lives».

Economic sentiment improved in April after the March decline

The improvement of the economic environment is recorded in the Economic Trends Survey for April conducted by the Foundation for Economic and Industrial Research. Specifically, the Economic Sentiment Indicator is back on a rising movement in April, continuing the general positive trend of the previous months, following a sharp decline in March, reaching 103.6 points from 99.8 in March (and 104.3 February). This development is a result of the rise in individual indicators in all business sectors of the economy, excluding construction, and also consumer confidence. The trend that has been taking place over the last several months is consistent with the growth rate of the economy, which is gradually recovering in line with the significant growth in the international environment. To some extent, the improvement in the indicator in April should also be attributed to seasonal factors and the opening of the tourist season, where there is a strong rise in demand from abroad, with positive effects on employment and general economic activity. In addition, the expected completion of the latest evaluation and the program, despite the considerable uncertainties that remain, creates the confidence that the economy will move upwards compared to the recent past. However, the progress of confidence in the coming months will depend critically on the conditions that will be shaped for the course of the economy itself outside the program. Whether, say, a strong growth momentum can be created or the economy moves flimsy into risks.

• In consumer confidence, the forecasts for the households' economic state, those corresponding to the economic conditions in the country and the intention to save, are considerably improving, while the unemployment rate forecasts record a marginal improvement.